Amazon made history on Tuesday after becoming the second American company to achieve a $1 trillion market capitalization, following Apple, which hit the trillion-dollar milestone on Aug. 2.

Amazon shares rose as high as $2,050.50 on Tuesday morning, pushing it over $1 trillion in value, before immediately falling back and then ending the day at $2,039.51, below the $1 trillion threshold.

Apple took almost 38 years as a public company to reach the 13-digit territory, while Amazon got there in 21 years. While Apple’s iPhone and other devices remain popular and its revenues are growing, it is not keeping up with Amazon’s blistering sales growth.

Amazon has impressed investors by diversifying into virtually every corner of the retail industry, altering how consumers buy products and putting big pressure on many traditional stores.

“It says a lot about Amazon and its ever-increasing dominance of segments of the retailing world as well as the web services business,” said Peter Tuz, President Of Chase Investment Counsel In Charlottesville, Virginia. “They have a tiny share of the worldwide retail sales market so there’s a lot left to capture there.” 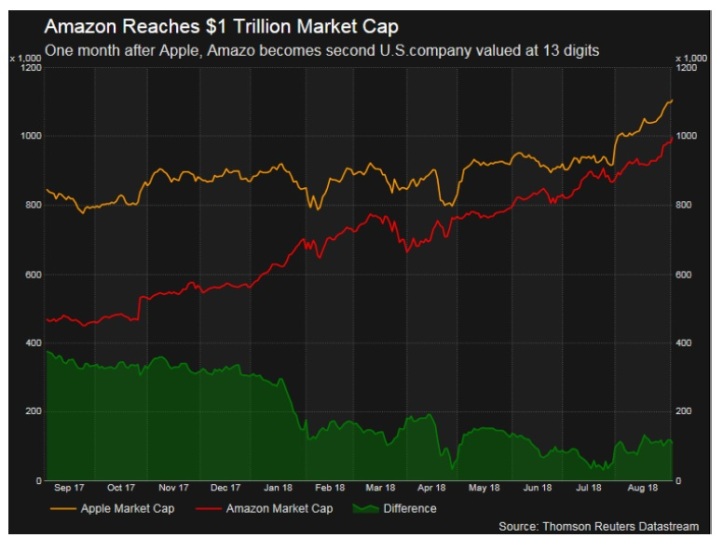 Apple begin trading in December 1980, but its stock did not truly start to take flight for another 25 years, spurred by the iPhone, the breakthrough device that left competitors in the dust.

According to Thomson Reuters data, analysts expect Apple’s revenue to jump 14.9% in its fiscal year ending in September, a hefty rise but still far short of Amazon’s expected revenue growth of 32% for 2018.