The global financial crisis of 2007-08 had shaken the faith of investors. But in the subsequent period that began in March 2009, the stock market made tremendous gains. In a little over nine years, it registered an increase of over 300%.

However, the longest-running bull market in modern financial history could be losing steam. The Dow Jones Index, which includes the top 30 publicly traded U.S. stocks, lost 1,389 points over a two-day period. At the opening of trade on October 10, 2018, the Dow stood at 26,442. By the time that the market closed on October 11, the Index was at 25,052.

Why has the stock market moved downwards? More importantly, is this an aberration or the beginning of a trend?

The reason for falling stock prices may lie in the recent increase in interest rates. The U.S. Federal Reserve had maintained the federal funds rate at close to zero for years to get the economy back on its feet after the 2008 crisis. But with the improvement in GDP growth, it began raising the rate steadily.

The American economy is now in a strong position. Unemployment stands at 3.7%, the lowest in 50 years. Second-quarter GDP growth is at an annualised rate of 4.2%. This is the sharpest increase since Q3 2014.

Mark Haefele, global chief investment officer at UBS Wealth Management says, “Rising rates have fuelled concerns that the economy has entered the latter stages of the business cycle and thus growth will slow.”

President Trump has laid the blame for the falling stock market squarely on rising interest rates and the Federal Reserve. He recently said, “I’d like our Fed not to be so aggressive because I think they’re making a big mistake,” and “… the Fed has gone crazy.”

What’s happening to the FANG stocks?

Tech stocks have been at the forefront of the bull rally. The FANG quartet – Facebook, Amazon, Netflix, and Google (Alphabet) – made tremendous gains over the last year. But that seems to have changed. Netflix shares plunged more than 9% last week. That is about double the losses suffered by Facebook, Amazon and Google. 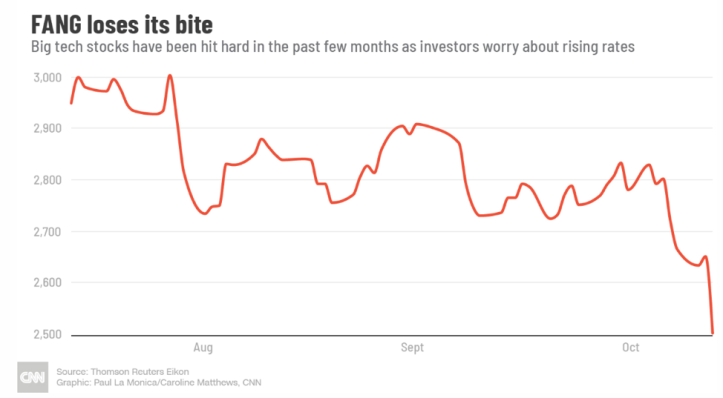 Even after the fall in tech stock prices, many investors think that the sector remains overvalued.

Stocks and bonds are falling together

There’s a unique feature to the recent stock market reversal. Bond valuations are plummeting in sync with share prices. They usually have an inverse relationship. A Bloomberg report points out that this has happened only thrice in the last two decades. In each of these instances, there was a negative effect on equity valuations.

Bloomberg Intelligence equity strategists Gina Martin Adams and Aditya Kalgutkar state in a note, “The correlation between stocks and bond yields has been positive for the better part of the past 20 years. Each flip to a negative correlation (2006-07, 2013-14) preceded a significant equity-market correction.”

The rout in bond prices has resulted in record withdrawals from exchange-traded bond funds. Blackrock’s flagship debt ETF, the iShares Core US Aggregate Bond ETF (AGG) saw an outflow of US$2 billion on October 9, a record for a single day. 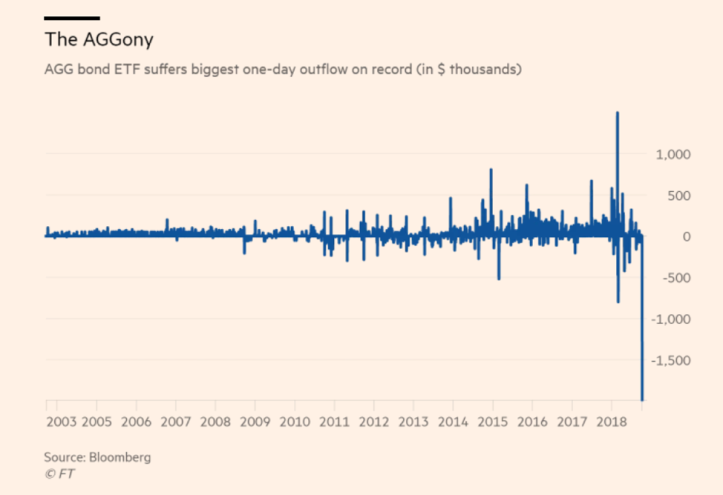 The rise in bond yields is expected to continue with other central banks joining the Fed’s lead in raising interest rates.

Commenting on the recent change in the bond market, John Vail, chief global strategist at Nikko Asset Management said, “It was not a good week. It felt like a breakout from the long downward trend in bond yields we’ve had over the past 30 years.”

The biggest one-day crashes in the stock market 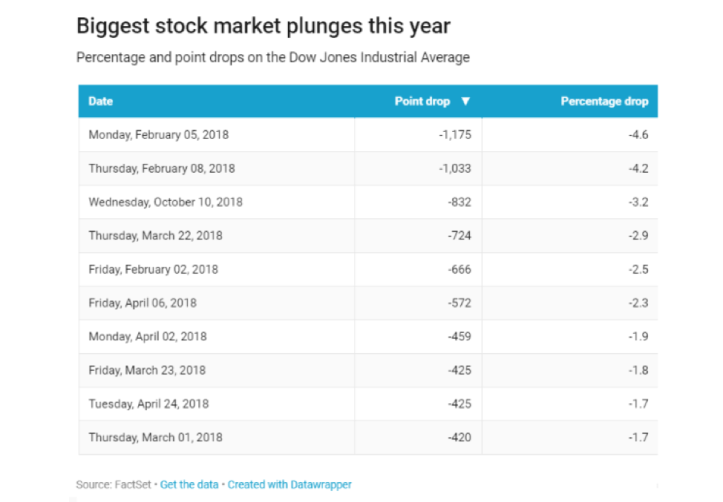 Stock market volatility has increased sharply in recent times. In earlier years, the single-day drops in the Dow were much lower. In the period up to 2017, the largest decline in a day was on September 29, 2008, when the Dow fell by 778 points in the aftermath of the global financial crisis.

Even the 9/11 terror attacks resulted in a relatively subdued fall in stock market valuations. On September 17, 2001, the first day of trading after the Twin Tower collapse, the Dow fell by a comparatively low 685 points.

When the stock market was moving upwards, many investors wished for a correction so that they could buy at reasonable valuations. Now that the market has plunged, they are not so sure if this is the right time to invest. Is it safe to buy at these levels? Or should you wait a little longer for the market to bottom out?

It’s difficult to decide. If you are feeling uncertain about making an investment decision, seek professional advice from your financial advisor. Your advisor should know what is happening with your entire financial lives hence they can recommend the best solutions tailored to your individual circumstances.

This is a guest post by ZUU Online, an Asian-based Finance Education Portal aimed at helping individuals to improve their knowledge on personal finance and money, through educational articles on business, investments, property and insurance.